7’s Heaven Streamed Around The World

As producers of Irish Rugby TV we were approached about the possibility of live Streaming two days of Women’s 7s rugby from UCD. Live streaming is something we have years of experience in, but this would be on a bigger scale than we had dealt with in the past. However, we love a challenge. 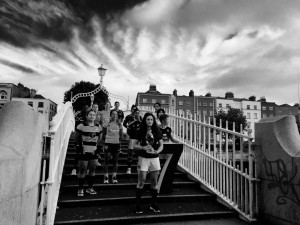 The requirements were for a three camera stream with graphics to show score, time and each group of teams. Matches took place between 11am and 7pm on Saturday and Sunday, all of which were included in the stream.

The first element we focused on was the live streaming solution, as our ATEM switcher would not suffice on this occasion. We eventually settled on the Tricaster 8000, which we would use for the first time. This may have been overkill but with the opportunity arising to take the Tricaster for the weekend as a demo we couldn’t turn it down. Paul locked himself away for a week and began teaching himself how to use this incredible machine. He had lots to learn with everything from booting up to overlaying graphics to be covered. 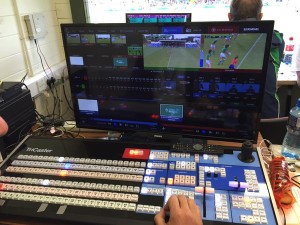 We decided we would contract in a camera crew for the weekend also as we would have our hands full with the stream. We were lucky with the location as UCD has a structure in place on the halfway line of the pitch which we could base ourselves in. The roof would host our two fixed cameras, one wide and one tight, while the third cameraman would be pitch side following the action. Our streaming studio was set up inside with room for two operators. John would be switching and calling the shots while Paul looked after the graphics. 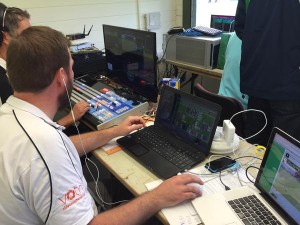 Once we felt we had the personnel and equipment sorted we travelled to UCD on the Thursday to begin rigging. This allowed a days grace for any last minute changes or fixes we needed to take care of. It also allowed us time to test the set up, which is something we always strive to do. 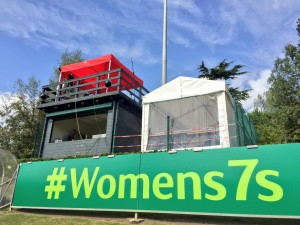 On the Saturday we were on location for 8am to prepare for the day. Our cameramen were in place and with everything tested we were ready for the weekends action to unfold with people tuning in from around the world to watch it.

It was an intense couple of days, which turned out to be a huge success. We had viewers from countries far and wide tuning in to watch their teams in action with a total of 35000 people enjoying the stream. World Rugby and IRFU were massively impressed with the service provided as we went above and beyond to make sure this was a top class production.

On the pitch there was success too as the Irish women managed to qualify for the World Series, which was their aim for the weekend. We were very proud of our achievements having taken on this size of a production and meeting all of the requirements. As producers of Irish Rugby TV it is important for us as a company to show the level of production we are capable of. We feel this showed that and more. 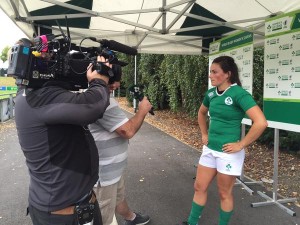 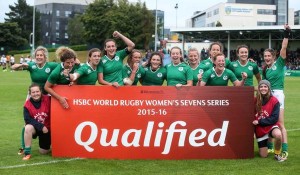