Today we went to the Ireland women’s press conference which was very informing. I went with Connor and learned quite a bit about the camera and the things that it does. I learned about the white balance, the pan function of the tripod, the peaking function and the ND filter.

We started off by doing some establishing shots of outside of Sandymount hotel, of the statue outside and of the aviva stadium that you could see in the distance. 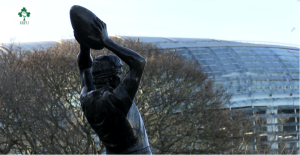 After that we had to wait for the two players that we were going to be interviewing which were Eimear and Paula. We had to wait for the media to finish talking to Eimear and then for her to get her picture to be taken during this time we setup the lights and camera for filming. We had to make sure that the lighting wasn’t too harsh. The filming went off without a hitch then we waited for Paula to arrive, who was running late. When Paula arrived we had to wait for her to get her picture taken and for her to be interviewed by the reporters, when all that was done we did the interview, which went well. Then we packed up and left. Tomorrow we will be editing the footage which will be good to see. 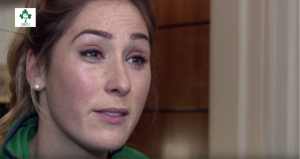