My first day of work experience was on Saturday the 1st of December 2018.

I helped set up the camera equipment for 3 interviews with Paul in Clontarf Rugby Club.

The 1st interview was with a referee ahead of his next match (Clontarf Vs Cork Con) about climbing the ranks in order to ref at a higher level.

He spoke about how he had recently refereed Munster “A” Vs Leinster “A” in the Celtic cup in Energia park And how that game was as intense as any Guinness Pro 14 matches, they play the same structure as the 1st teams.

The next two interviews were with Ivan Skelly and Carol-Ann who were being interviewed on the newly set up Clontarf Bulls.

A team set up for rugby players with additional needs.

After we finished the interviews we needed to get footage of Clontarf vs Cork Con as the referee we interviewed was reffing this game so that we could edit it into the interview later on in the week. In order to shoot some footage I used a DJI Osmo which is good to use up close, so I predominantly shot clips of the ref warming up/making a few calls when he was on the near side. 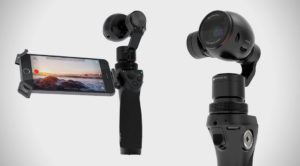 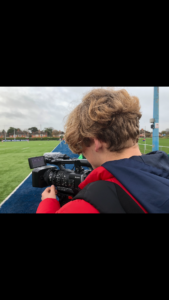 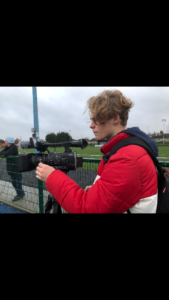 While I was using the DJI Paul was shooting clips on a Sony PXW which I also got to use toward the end and Paul taught me how to zoom and focus correctly during a match.

My next day of work experience was on the Monday the 3rd of December.

I visited Leinster’s HQ in UCD. I was working with Gavin at a press conference with Devin Toner, Felipe Contepomi and Rob Kearney. I thought this was very interesting as I could see a press conference from a different perspective. I could tell that Rob Kearney was extremely comfortable in front of camera, not that Felipe or Devin were in any way uncomfortable it’s just I felt you could tell Rob could give the best answers without being too ponderous.

Gavin shot the press conference on a Sony PXW. 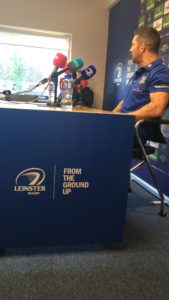 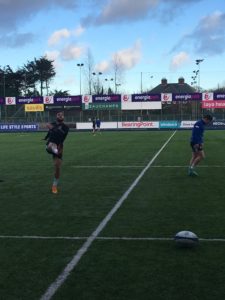 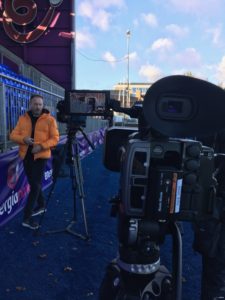 On Tuesday the 4th of December I travelled with Jonathon and Orla to town to shoot an informative video for Aberdeen insurance informing their clients of the Changes they face with Brexit. I helped by setting up the camera equipment and also by helping adjust the camera angle to be prepared for when actually shooting the video.

This day was particularly informative, just from a video making perspective.

I learnt a thing or two about editing with Paul and Orla and helped editing with the interviews we shot on the Saturday.

I’ve enjoyed my time thoroughly with VOTN because of the wide variety of different things they carry out here.